What are autumn olives?

Autumn olive (also known as Autumnberry) is an early successional invasive perennial bush that produces copious amounts of edible berries; arguably the most common edible wild fruit in the eastern half of the United States (according to Samuel Thayer), and still spreading west.

Yes. The small red berries of the autumn olive bush are edible.

The common name "autumn olive" may be better known than "autumnberry," but this name is somewhat confusing and misleading. Following the standard set by authors like Sam Thayer (Nature's Garden, 2010), I believe this fruit deserves better and ought to be rebranded as autumnberry to eliminate the unfair comparison to Russian olive, E. angustifolia, from which the better known common name derives.

That said, I use the two names interchangeably throughout this piece. 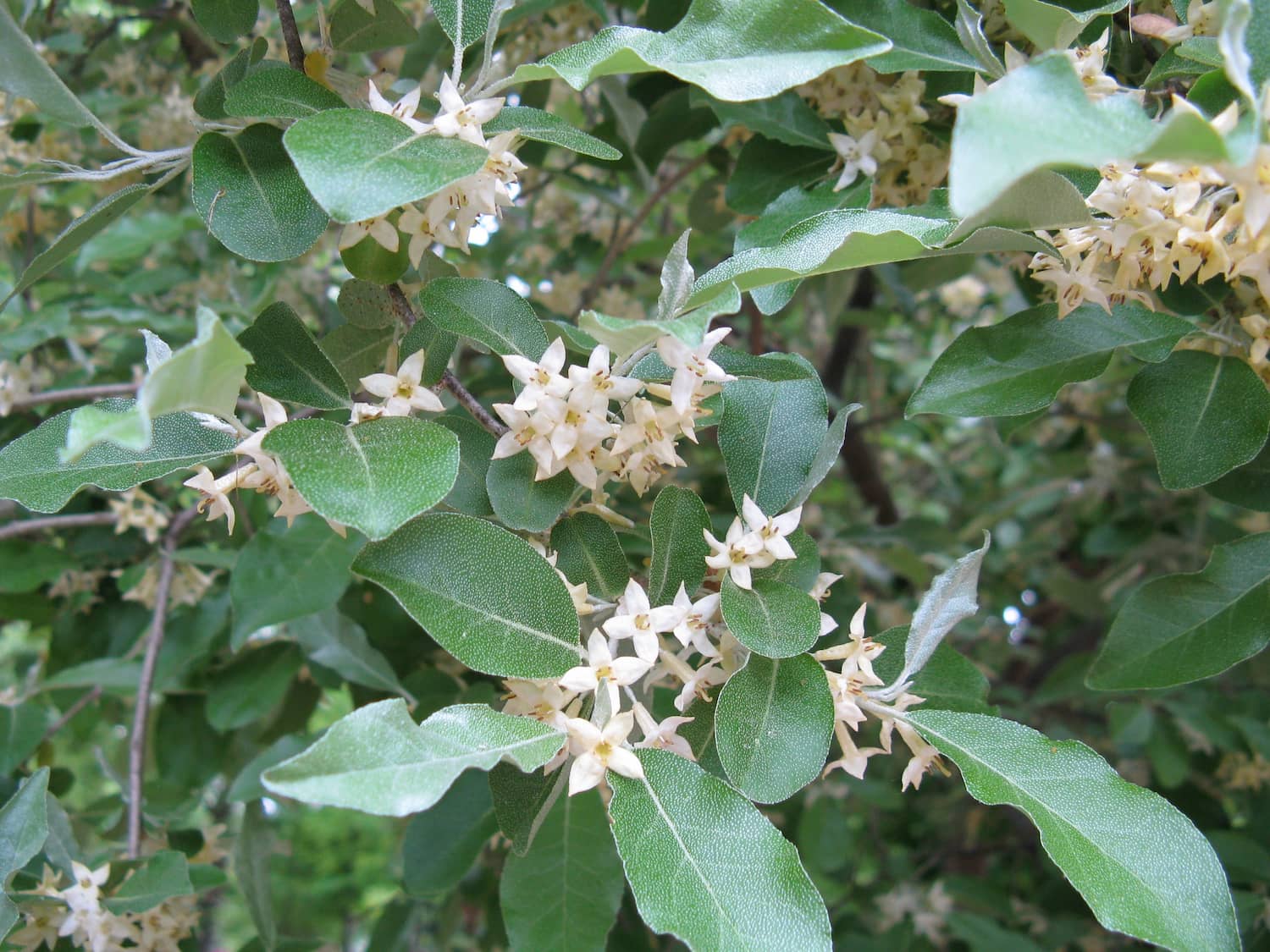 Where to find autumn olives

The autumnberry is a quintessential roadside weed, easily overlooked but quite conspicuous once you develop an eye for it. As a rare non-leguminous nitrogen-fixer, it favors poor, marginal soil and eroding hillsides, and in fact it was introduced to the United States from China in an effort to combat erosion. Because of its tolerance for poor soil, it has a tendency to take over any overgrazed pasture spaces where it is introduced.

Because of how recently the autumnberry has become a "noxious weed" in North America, it can sometimes be difficult to predict where you might stumble upon it, and its range continues to grow as birds and mammals spread its seeds around the continent.

It is ubiquitous in the United States from the eastern seaboard as far west as Missouri, then becomes much less common and eventually absent as you continue on to the Great Plains. It has also been spotted in southeastern Canada, and well as isolated populations all the way out in Washington and Oregon.

The autumnberry is one of nearly a dozen Elaeagnus species with a long history of use as a food in China.

When to gather autumn olives

Like many invasive species, the autumnberry outcompetes its native peers by leafing out just a little earlier and staying green just a little longer than everybody else. Its olive-like leaves with characteristic silvery undersides are easy to spot on highways and roadsides in April and May across its range. The bushes are even easier to spot a few weeks later when they produce thick clusters of pale yellow-white flowers, which impart a strong, sweet fragrance.

Autumnberries will ripen from light green to yellow and finally to orange-red early in the fall, and will remain on the bush for many weeks until animals carry them all off. I've seen ripe autumnberries appear as early as mid-August in the Ohio River Valley, and stick around as late as the end of October.

Why forage for autumn olives?

The autumn olive is yet another villain in the futile yet never-ending war on invasive species, that happens to produce literal tons of delicious and nutritious food which could easily keep your sweet tooth satiated all winter long after some basic processing.

I cannot overstate how prolific an autumnberry bush can be: a single specimen might yield several pounds of fruit which can be gathered in a matter of minutes with the right techniques.

Besides their sweet cherry-like flavor, autumnberries contain up to eighteen times as much lycopene as tomatoes, pound for pound.

Autumnberries are so prolific that their branches are often weighed down by their fruits.

Based on my experiences in the field of restoration ecology, I can assure you that we will not—indeed, cannot—qeradicate this invader. And you know what I say: if you can't beat 'em, eat 'em!

How to harvest and prepare autumn olives

Gathering individual berries by hand will be exceptionally tedious and not generally worth your time. To make the most of this abundant wild berry, you'll want to harvest en masse and sort at home later.

Unlike many other wild fruits out there, autumnberries tend to be more firm and less juicy, so they won't turn into a mushy mess when harvesting large quantities.

There are a couple tricks you can use to accomplish this: as discussed with mulberries, you might lay a tarp down at the base of the bush and shake its branches to drop the fruits. Or you might try throwing a heavy duty trash bag (consider the thicker "contractor's bags" found at home improvement stores to avoid tearing) over the branches and then shaking or whacking with a stick to release the berries.

Either way, you will invariably have to sort out unripe fruits, stems, leaves, and insects before proceeding.

After your fresh, clean crop is sorted, you might opt to simply eat the berries raw. In the center is a small, fibrous, edible seed which I think adds a pleasant crunch, but pickier eaters have been known to spit them out.

Autumnberries take well to all of the usual processing methods, but really shine when made into sweet and savory sauces, or dried for fruit leather. Experiment with autumnberries as a partial or complete substitute for tomatoes in your favorite ketchup or BBQ sauce; add them to any and all homebrews you might concoct during the fall; or follow Sam Thayer's advice and process them down to a juice.

If you plan to make fruit leather, simply mash up the berries, seeds and all, add a pinch of sea salt and set in your dehydrator. Once you're acquainted with the unique flavors that arise in these circumstances, the sky's the limit for mixing in additional ingredients: try adding maple syrup and a dash of cinnamon next time!

How to sustainably work with autumn olives

The autumnberry is here to stay in North America, whether land managers like it or not. It will not be eradicated by humans, and our impact as foragers is negligible at best.

That said, if you happen to be the manager of some land where it is present, you might consider removing it in order to give your local natives a fighting chance—species diversity is pretty much always a good thing, and invasive species like autumnberry often form impenetrable monocrop thickets that severely homogenize an ecosystem, to its detriment. Resilience is found in diversity, and monocultures can be perilously fragile.

The best time to attack is in mid to late summer, well before the fruits ripen, when the plants have invested the majority of their energy into aboveground growth. You will most likely need a good hand saw to cut the woody stems down to ground level, but if you're dealing with more than a few individuals you're better off with a chainsaw, or with a friend who knows how to wield one.

(Chances are good that your autumnberries are growing alongside the similarly invasive bush honeysuckle, Lonicera maackii, which favors the same niches and produces bright red berries that are not edible. If you're knocking back the autumnberries, you might as well take these out, too.)

Keep in mind that one round of cutting will not be the end of your work: eradicating invasives like the autumnberry is a multi-year endeavor, and for all we know, it could be a lifelong battle for you, personally, if the seed bank is fully stocked and/or they keep getting reintroduced to the same spots on your land.

The bushes will most likely send up new suckers from their stumps and roots not longer the first cutting, but these can be easily knocked back with a lawnmower or a string trimmer. The following growing season, new autumnberry seedlings from the underground seed bank will be running rampant through this space, so you will need to continue mowing a few times per year to keep them in check. As with other similar invasive species, autumnberry seeds remain viable for many, many years.

Autumnberries offer a fantastic object lesson in reading the landscapes around us. Remember how they thrive in poor, eroding soil in disturbed and marginal spaces? Well, what does that tell you about the specific area where you find them on your land? (Answer: the soil is probably low in nutrients and possibly subject to erosion.)

So as the thoughtful and considerate ecosystem engineer you are, my fellow human, you know better than to simply treat the symptoms—unwanted invasive species—and instead, you aim to root out the source of the problem: deficient, marginal soil.

The presence of autumnberries in particular suggests to us that this soil is deficient in nitrogen, the primary nutrient required for a plant's green growth. So you may want to amend with compost, worm castings, bat guano, or other nitrogen-rich organic materials, and consider planting a leguminous cover crop like peas to ideally crowd out and replace the autumnberry seedlings, while fixing nitrogen for future successions of plants.

As you begin to gain control over the autumnberries in this space, you will eventually want to plant native perennials to fill the niche long-term. There is a wide variety of species you might consider working with: serviceberries, brambleberries, and elderberries would be happy to take over here, as would currants, gooseberries, or even a cultivated, non-invasive species of Elaeagnus if you like the berries but want to be a responsible land manger. Your local (edible) perennial plant nursery may be able to offer specific guidance.

None when the berries are in season. Foliage bears a passing resemblance to the closely related Russian olive, E. angustifolia, but there is no chance of mixing up the fruits of these two species.

Did you find this article helpful?

This is an excerpt from Foraging North America: The Botany, Taxonomy and Ecology of Edible Wild Plants.

Foraging North America is a 12-week crash course designed to arm you with a functional working knowledge of botany and taxonomy that you can take with you out onto the land to fast-track the ID process and boost your confidence when gathering wild foods for the first (or five-hundredth!) time.

You'll get a practical education in ecological literacy by applying the ethos of conservation through use—the (surprisingly) radical notion that humans can, in fact, have a positive impact on the environments that we move through.

Food is everywhere—you just need to know what to look for!

Check out Foraging North America to get started today.